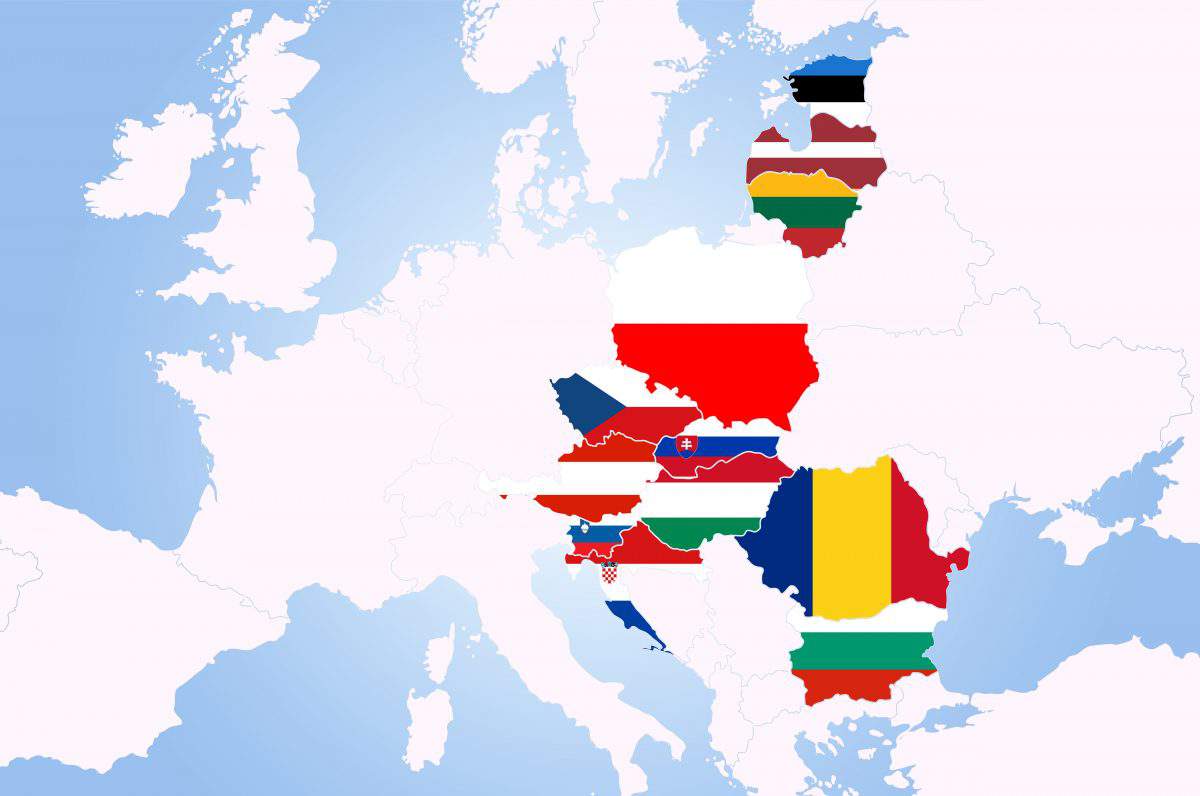 Maintaining the dynamic development of its national economy, Poland is becoming one of the most active players in European affairs. If Warsaw’s activity was previously seen mainly in the political and military spheres then recently, against a backdrop of growing trade and general economic contradictions between America and Europe, it is also aiming to make its mark in geopolitical issues – and it is doing this with its characteristic historical pugnacity.

The Three Seas Initiative (TSI), the project of an association of twelve countries within the area bordered by the Baltic, Adriatic and Black seas, which Poland is promoting, is supposedly a multi-sectoral economic association that will provide for the economic integration of countries that have joined the European Union in the last thirty years.  In practice however, this association is the continuation of a politically motivated process for strengthening the influence of newer EU countries as a counterweight to the “old European” economic nucleus of the EU. The economic element is currently in its early stages. Furthermore, the formal establishment of the project has barely begun and is encountering major difficulties. In practice, the Three Seas Initiative operates from summit to summit, without an administrative infrastructure or staff to support in attracting investors to the project.  In essence then, it is not yet an organization but rather a platform on which certain political vectors are revealing themselves. Naturally, no investment project has yet been designated a part of the Three Seas Initiative.

The key economic aim of the Three Seas Initiative is a reduction in the dependence of the central and eastern European countries on Russian gas through an increase in pipeline interconnectivity in the EU, and in particular at its eastern European extremity.  Beneath the surface, the Three Seas Initiative appears to represent an attempt by transit countries – primarily the hydrocarbon transit countries – to preserve their status at a time when much of industrially developed Europe is attempting to minimize transport risks.

For now, the project appears problematic, as the initiative’s most recent summit in Ljubljana in June 2019 demonstrated: despite having common economic interests, the participants in the initiative displayed inertness when it came to providing financial support for projects within the TSI framework and formally establishing the initiative in its present form.

Only Poland and Romania – the main beneficiaries of the initiative – have invested funds in the Three Seas Initiative Investment Fund that was created on the eve of the meeting. The remaining partners are dragging their feet about taking a decision on this issue on various pretexts, which attests to the participants’ reluctance to invest themselves in the initiative’s current form. In such conditions, the chances of obtaining funding from European and global financial investment institutions looks doubtful.

The difficulty is that the countries involved in the initiative do not generally possess the resources for an independent infrastructure to implement the energy projects for which the initiative has been arranged.  The most that can be expected in terms of genuine cooperation from its participants is in issues of creating a synergetic management system, reducing operating costs and developing a favourable climate for investment. Everything associated with various forms of gas reaching the area of the initiative must be financed by foreign investors. Even among its participants, enthusiasm for the project is still very modest, which is understandable considering the project’s effective lack of a formal organizational structure.  This in turn attests to the diversity of economic and political interests among the countries involved in the initiative; Austria and Poland ultimately have opposite interests in matters concerning guaranteeing Europe’s energy security. Both countries have claims to a role as an essential gas hub, as does Slovakia to a lesser extent.

Poland’s current aim is to become the United States’ dominant ally in Europe, including in issues of energy security, and thus to obtain a significant part of the energy “rent” which the United States will receive from European energy consumers thanks to a price differential. Poland’s “three seas” partners are fully aware of this, and it is precisely this wish of Poland to defend its interests at any costs that is currently one of the key impediments to implementing initiatives from Ljubljana.

For now, it is highly unlikely that “old Europe” would agree to a scheme such as this for monetizing supplies.  The Three Seas Initiative is a priority for Poland, however: on the one hand it provides an opportunity to transform the level of economic development it has attained, which has allowed the country to rise significantly in ratings of the world’s most developed countries in recent years; at the same time it will help it to avoid suffering a loss in its dynamic development through crises within the European economy (Poland’s economy grew by around 5% in 2018, with one of the most important reasons being increased domestic consumption; in 2019 by contrast, it is forecast to diminish to 4% and possibly even lower). It is likely that Warsaw is assuming an inevitable deterioration in the EU’s internal situation and attempting to economically reconfigure the region on its own terms and using its accumulated potential.

The United States has stated its willingness to provide political and diplomatic support for the development of this regional cooperation mechanism, which will not only help Washington to lobby to supply its LNG to the European market, but also strengthen its influence on the countries taking part in the initiative, which on the whole are already Washington’s most aggressive policy allies and depend on it economically.  At the same time, the Americans can use the TSI as a tool for developing alternative energy systems in Europe, which are capable of negating those elements of European energy packages that hold the United States back. The United States’ strategic aim – which coincides with Warsaw’s interests – is to create the conditions for implementing an “energy NATO” in the context of which questions about the competitiveness of one form of energy or another would disappear.

However, how far the United States is prepared to invest in the initial phase of building this institution is open to question, considering the far from simple situation in relations with its allies and its involvement in more strategically significant trade with China. It is currently unlikely that the United States will undertake this, and for now there is no other anchor investor for the project on the horizon. For Poland though, the fundamental point apart from this is acquiring preferential conditions for modernizing its own army through American armament or the creation of channels for receiving additional finance for these aims.

One should also remember that as a tool for reconfiguring the European Union area economically, the Three Seas Initiative is competing with the mechanism for cooperation between China and the countries of central and eastern Europe promoted by China – the Sixteen Plus One project – whose organizational structures have already been presented in Beijing and are also being developed in Sofia.  This mechanism also implies selecting countries in central and eastern European and also possibly a number of countries from “old Europe” from the general area of the EU. In the foreseeable future China is planning to increase its commodity turnover with its eastern European partners to $100 billion.  It is important to note that Beijing is trying to find mechanisms for cooperation with the Three Seas Initiative, but taking into account the political element of the project and the political situation this looks less probable than ever.

One cannot avoid mentioning that despite the understandable delay in rolling out its infrastructure, the Three Seas Initiative has a substantially more stable foundation, which is relevant to all countries in central and eastern Europe, i.e. guaranteeing the energy security of the continent based, moreover, on American energy resources.  Furthermore, Warsaw can at the very least always count on Washington’s political support in competing with Chinese projects. Whether China would try to “buy” Warsaw’s TSI allies is another question, but without Poland the project would essentially not be possible.

Of course, the strategic fate of the initiative depends in large part on the United States’ ability to supply Europe with the quantities of LNG previously stated, but if it is necessary to shift towards other sources of fuel, this will not represent a fatal blow. How far the countries of “old Europe” are prepared to form new relationships with transit countries is another question: these do not include only Poland moreover, but a number of other Black Sea littoral countries, which have been focused on receiving gas from the Middle East and from the Turkish gas corridors. This will understandably increase the significance of the countries on the southern flank of the initiative, calling its basic foundations into question.

The issue is that taking account of current economic dynamics, the countries taking part in the Three Seas Initiative are clearly focused on participating in the European gas market as intermediaries.  The dynamics of the industry’s development are such that it will not secure any kind of significant domestic gas consumption other than in Poland, which is counting on leadership in the project assuring it additional resources for the development of its industry and increased competitiveness in the EU and globally.  This means that there will be a significant speculative element in the actions of these countries from the start, which will grow if problems arise with supplies of American shale LNG to the European market.

The main conclusion that can be drawn from analysis of the current situation is that in certain political circumstances the Three Seas Initiative could be an entirely viable project.  And Poland will indeed be able to seize from Germany the status of the leading country for determining the manner in which European energy security should be guaranteed. However, this will be a political project from the outset and will have no added value in terms of ensuring Europe’s energy security. There is no sense in looking at it from the point of view of market mechanisms.  The real economic meaning of the Three Seas Initiative is to serve as an instrument for accumulating “transit rent” from central and eastern European countries that are on friendly terms with the United States and managing the competitiveness of the European economy.  If the Trump Administration is able to drop its anchor in these three seas, it is highly probable that the level of non-economic risk around the energy security of EU countries will increase.