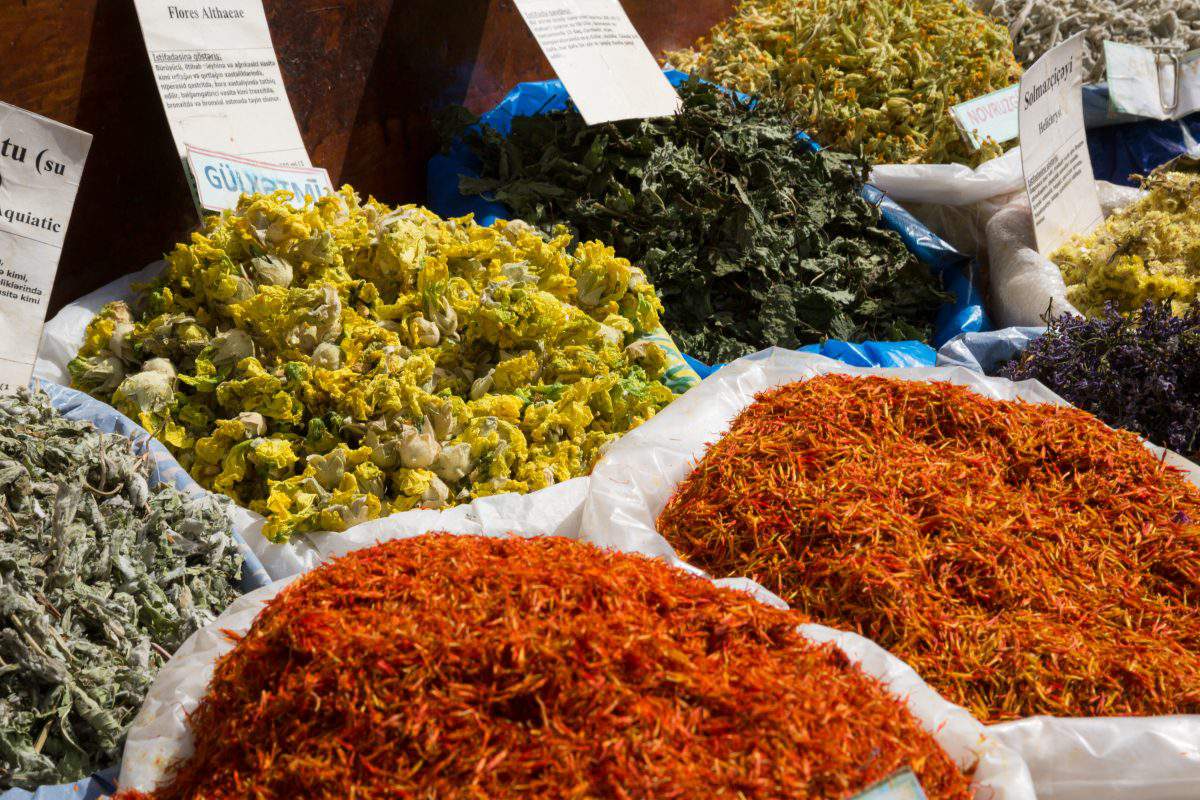 Different herbs in bags on a street market in Lagich, Azerbaijan

A visitor from a major European city who recently visited Baku on business was unpleasantly surprised by the customs that hold sway in the bazaars, or markets, of the Azerbaijani capital: a local market trader quoted such a good price for some of Baku’s famously tasty tomatoes that the visitor simply could not resist the opportunity to take a couple of kilos of these fresh and utterly delicious tomatoes home as a souvenir.  The seller carefully selected what he assured the customer were the ripest tomatoes and placed them gently in a bag.  When the guest, bowled over by such marvellous service, returned to his hotel and took a look at his shopping however, it turned out that half of the tomatoes were far from fresh.

Anyone who has encountered this “bazaar” mentality and whose work often brings them to countries in this region knows that you need to keep your eyes peeled and haggle hard.  And even the most experienced customers can be tricked. Sellers will call over-inflated prices a simple mistake or simply short-change you; if you check your change and find a couple of large notes missing from it, they will make out that there has been a terrible mistake and they definitely did not mean to trick you.  They will embrace you warmly, call you their best friend, and even invite you to dinner at their home as an esteemed guest.  True, if you come back to the same market the next day, the same stall-holder may not even remember you and even if he does, this is no guarantee that he won’t try to trick you again. It is no wonder that the traditions of the eastern bazaar are being inadvertently carried over into big business, where instead of street traders, government men in expensive suits are involved.

Over a year ago, the Azerbaijani president Ilham Aliyev declared at the opening of the Southern Gas Corridor (SGC) that Azerbaijani gas would be a new reliable and uninterrupted source of fuel for Europe. The implementation of this project will allow Baku to redraw the continent’s energy map. The Azerbaijani leader was not being cunning: Shah Deniz, from where Azerbaijani gas has been flowing to southern Europe, is one of the largest deposits in the world, with reserves of more than a trillion cubic metres of natural gas. Britain’s BP, which owns 28.8%, is a key project operator. Other participants and their respective shares of ownership include Petronas (15.5.%), SOCAR (16.7%), TPAO (19%), NICO (10% and Russia’s  LUKOIL (10%).

A number of authoritative experts believe that the SGC may well substantially influence the balance of power in Europe’s energy industry in the future. This is primarily about creating real competition for Russian gas. For now, Russia’s Gazprom has in fact remained unshakeable and the SGC is not having a serious influence on the European gas market. Understandably, there are few in Brussels who can like this state of affairs. And it looks as though this is where enthusiasts of the rules of the bazaar have entered the game.

There was a recent loud pronouncement in Baku about gas supplies to the EU via the SGC system costing not more than $200 per thousand cubic metres – a very attractive price. But the same experts who considered the SGC credible in the recent past have concluded that this figure is inaccurate: they made a few simple calculations and discovered that the cost of transporting Azerbaijani gas through pipelines from the eastern border of Turkey to Italy will itself be around $180 per thousand cubic meters. As a result, the price for gas from the Shah Deniz deposit for the European market could vary from $270 to $290 per thousand cubic metres.

Moscow, meanwhile, is selling its gas to Europe at $254 per thousand cubic metres and despite the obvious cooling in relations with its nearest western neighbours due to the conflict in Ukraine and sanctions imposed on Russia, Gazprom head Alexey Miller remains supportive of a flexible approach to the process of discussing price issues.   Azerbaijani gas is thus in effect almost 10% more expensive than Russian gas. Bearing in mind the vast volumes involved, this is a substantial difference.

Finally, the issue of Europe needing to attract additional sources for filling the pipelines that are independent of Baku make plans to expand the SGC’s capacity pressing.  However, the prospect of connecting Turkmenistan, Iran and Kazakhstan to the gas transport infrastructure remain more than vague.

One cannot escape the feeling that Baku is trying consciously to mislead potential Western buyers. Although every schoolchild understands that twice two will always be four, the calculator in the southern gas “bazaar” is unreliable and has a glitch in favour of the seller: twice two could turn out to make five or even six, just as long as a steady stream of cash pours into the Azerbaijani public purse.  Why should one speak about obvious negative factors and point out the risks associated with the project’s future trading prospects if they can be avoided with silence? Sadly, it has to be acknowledged an approach like this bears no relation to the civilised market that Europe is counting on.