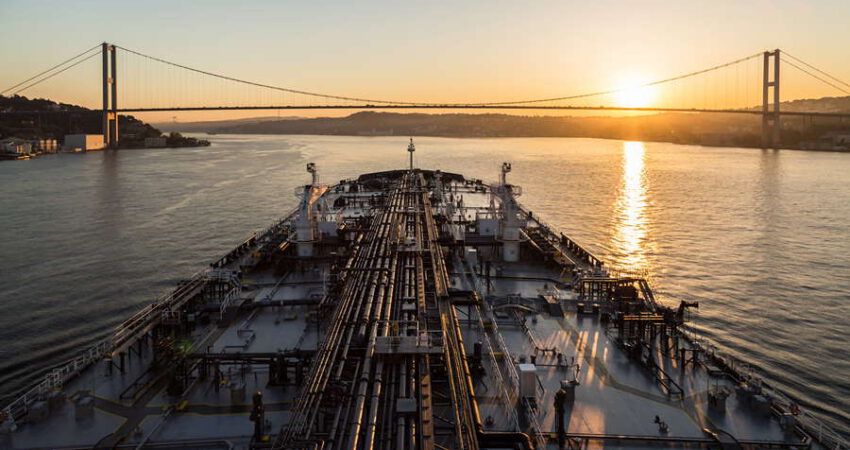 Oil tanker is passing through Bousphorus strait when it sunset.

In 2020, Turkey’s President Erdoğan triumphantly announced the discovery of the “huge” new Sakarya field in the Black Sea, which was one of the largest finds in the world last year. It was discovered during drilling of the ultra-deep Tuna-1 well.

Sporting gas workers’ attire, Erdoğan spoke of the countless riches that Turkey now possessed and which would undoubtedly secure its energy independence. The Turkish authorities have valued Sakarya’s reserves at 405 billion cubic metres (bcm) of gas and have promised to start drilling in 2023.

It all looks as through the “capture” of Sakarya is going according to plan. In the middle of May, the Turkish media announced that the drill ships Fatih and Kanuni were in the area of the field, along with the seismographic research vessel Barbaros Hayreddin Pasa. Energy minister Fatih Dönmez announced the beginning of drilling of the deep-water wells, of which there should be ten by 2023, and thirty to forty by 2028.

When talking about the new field however, Turkey has often needed to speak hypothetically. The government is hardly prepared to set out a more objective and detailed position in the current circumstances, and it is very clear that it should take its time to draw conclusions about the impact of the new discovery on the entire system of energy import.

First and foremost, the geological characteristics of the site remain unclear, as does whether the reserves are merely estimated, or recoverable. Experts view Erdoğan’s declaration that gas from the new field will start to reach Turkish consumers within two years sceptically because of the complexities associated with deep-water extraction.

The field is located 4.5 km below the sea bottom, at 2 km depth. Located alongside Sakarya is the Neptun Deep field, which is being developed by Petrom OMV and Exxon Mobil. Thomas Purdie, analyst at Wood Mackenzie, notes that the Black Sea has a unique morphology and that Turkey could well come up against the same problems as those that arose during work on Neptun Deep: “The basin center is deep, cold, and highly anoxic. These harsh, challenging conditions require specialist experience, not currently at TPAO’s disposal. The Sakarya development will almost be at the deepest limits of the Black Sea. This is an ultra-harsh environment.” Global oil and gas companies are usually reluctant to become involved at depths like these, as the risks are too high. For now, the Turkish side does not have data to show that these sites are not geologically connected. In a negative scenario, Turkey’s potential for extraction could be very limited.

Last year, the state Turkish Petroleum Corporation (TPAO) published an environmental impact assessment stating that if extraction takes place, preference would be given to unmanned subsea facilities. However, it is not yet clear how suitable that type of equipment would be for this field. But even if this issue can be fully resolved, and even with its great confidence in its own powers, Turkey would need technology and experience in deep-sea drilling and extraction that TPAO simply does not have. Experts are expressing doubt that Turkey will in fact be able to start extracting gas from the field on its own in 2023, or even at all.

Energy minister Fatih Dönmez has stated that TPAO will be able to implement the project independently and has ruled out involving international companies. But rumours have appeared in the media that the company is in fact holding talks with one or more partners.

Even if Turkey is able to extract gas from Sakarya, the volume will not exceed 5-6 bcm per year, which is less than 15% of the country’s requirement. Considering the dynamics of growth in domestic demand for gas, Sakarya will hardly prove to have a noticeable effect on the Turkish market in the future. Ankara will continue to be a major importer of gas, mainly from Azerbaijan and Russia, which currently supply two thirds of the gas Turkey imports.

Moreover, such a large project may prove beyond Turkey’s means. In 2019, a debt and currency crisis erupted in the country and in 2020 the coronavirus pandemic and a total lockdown struck a further blow to the economy and the lira. Inflation and unemployment levels in Turkey remain high, and the vital tourist industry is suffering huge losses. The country’s economy is clearly in a bad situation, in which it will be difficult for it to secure investment in the project – which according to various assessments could be as much as $3.2 billion.

The project to develop the Sakarya field promises to be complex and expensive. Several experts believe that in itself, it may not be a panacea. In an interview with Gazette Duvar, the Turkish economist Ugur Gurses stated that the discovery of the Sakarya field will not help Turkey cover its current account deficit and will not have a significant impact on the country’s economy in the long term.

As a whole, the Sakarya story looks like a timely and very much needed project for Recep Tayyip Erdoğan. As chance would have it, the planned start of gas supplies from this field that solves all problems coincides exactly with the next elections for head of state and with the hundredth anniversary of the founding of the independent Turkish Republic in 2023. But the effective implementation of the project, if it is even possible, will require engaging foreign experience and technology. And when it comes to this, it is not worth Turkey battling for independence.