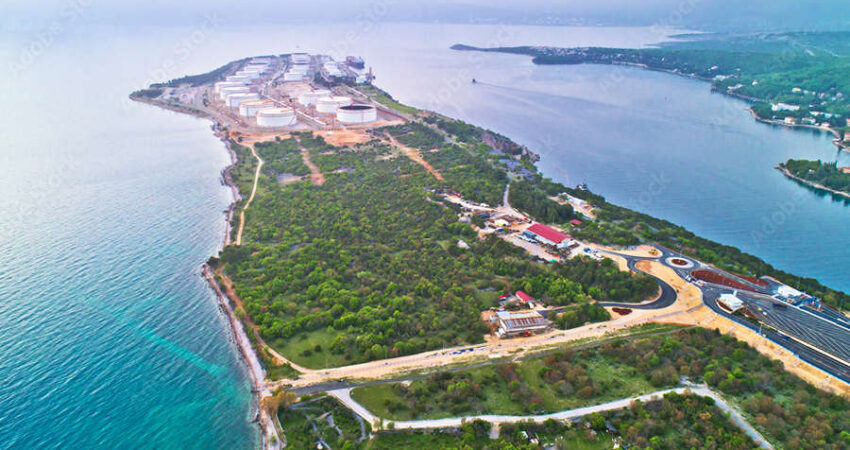 Dobrodošli na Otok Krk! (Welcome to Krk!) Krk, the largest island in Croatia and the Adriatic has long attracted tourists with its favourable climate and wealth of monuments reflecting a centuries-old culture, which visitors to the island encounter at every turn. Krk is also the most populous island in the Adriatic Sea: according to the most recent census, in 2011, there were over 19,000 people living on it. This year, Krk has gained yet another place of interest – but one that has not been universally welcomed.

The floating regasification and storage unit (FRSU) on Krk was supposed to be a New Year’s gift for Croatia and the entire region. At the beginning of 2021 an event was held with much pomp to mark the commercial launch of the new LNG terminal, costing €234 million, half of which was provided through the European Union.

Croatian prime minister Andrej Plenković stated that the new terminal – which was the government’s main flagship project – would allow the country to occupy a new position in the European and global gas system. As he put it, the terminal will be key to providing security of energy supply and diversifying gas supply routes for central and south-eastern Europe. Croatia has decided not only to secure new supplies of fuel for itself, but to export fuel to neighbouring countries and to Ukraine.

Croatia’s wish to strengthen its position in the gas market is entirely justified: consumption of gas in the country is growing against a background of increased capacity for generating energy from gas. Since 2014, demand has grown at an average annual rate of 3.5% and in 2019 it stood at 2.9 billion cubic metres (bcm). Roughly half of consumption is provided by imports, albeit from just one vendor. In 2019, Croatia was the largest buyer of Russian gas in the Balkans (2.82 bcm). Diversifying the sources of energy supply is an important principle of the development of the European energy system and the new terminal could significantly reduce purchases of gas from Russia. However, the advantage lay in the FRSU being focused on exporting LNG, to Hungary, Ukraine, Slovenia, Italy and elsewhere. Before its launch, operator LNG Hrvtska stated that the terminal’s capacity of 2.6 bcm per year had already been bought up for three years ahead. 80% of capacity had been bought until 2027, and 50%, up to 2035.

Alas, the New Year’s wish was not destined to be fulfilled immediately. In January, after the first shipment of American LNG was unloaded, the terminal’s work came to a halt. By a cruel stroke of fate, it was exactly then that suppliers lost interest in the European sales market. Two vessels carrying Qatari gas and intended for Croatia were redirected to the more lucrative Asian market: this became particularly attractive due to a cold spell and a shortage of vessels. According to a previous schedule, the Krk terminal should have received five shipments in January to February. On 14 May 2021 the terminal received just its sixth supply. Investors were counting on the initial frequency being resumed but the next delivery on 31 May was cancelled.

Moreover, the FRSU has encountered administrative and technological problems that make the process of forecasting the situation regarding its loading more difficult, at least for the next year. In these circumstances, it is not easy to draw conclusions about the economic viability of the project. Previously, there was talk of the costs being recouped over a twenty-year period. The main investor in the construction and purchaser of the terminal’s capacity for the next three years, state electricity generation company HEP, did not stipulate a fixed purchase price or formula for establishing one in the contracts for the supply of gas for 2021 – a justified step given a state of the market that is difficult to predict.

During construction, the project came in for criticism from environmental groups and the local population. Vjeran Pirsic, president of the Krk-based NGO Eko Kvarner, was one of the most active opponents of the project right from the design stage. He maintains that even during public hearings, LNG Croatia was unable to provide local residents with any information capable of allaying their fears about the terminal’s effect on the environment. Ultimately, the company was unable to achieve the close engagement and cooperation with the public that is essential for planning a project on such a large scale.

Right from the terminal’s launch, local residents started to complain about high levels of noise and pollution, and some are worried that this could deter tourists. The tourism sector makes up about a fifth of the GDP of this legendary “golden island.”

Activists also see a problem with the proximity of the FRSU to the island, and its potential influence on the ecosystem. The terminal actively uses sea water as part of its work, leading to its local cooling. Additionally, environmentalists object strongly to the chemicals that are used to protect the terminal’s pipes from mollusks and algae. When the necessary permits were being issued, a special governmental commission stated that these fears were unfounded.

It is true that the issuing of permits, like construction, took place on an accelerated basis. The original project included the construction of a full-scale onshore terminal. However, when the project was re-launched in 2016 preference was given to the Golar Viking tanker which was supposed to be re-fitted as a FRSU. There are several dozen such modified ships worldwide. In order to speed up construction and reduce its cost, this was the option chosen.

The local population would have preferred an onshore terminal and this would have increased the potential capacity by two times, but this was beset by legal difficulties connected to land law. Furthermore, Croatia was being pressured by the United States, which was demanding that the terminal be launched as soon as possible. Concerns were raised repeatedly in Croatia that the speed of design and construction might lead to incorrect technological calculations. The terminal has not been connected to the national energy grid and the electricity needed for regasification is produced offline by the FRSU.

The project for Croatia’s first LNG terminal undoubtedly pursued the noble aims of diversifying energy supply sources. However, the difficulties that the project has encountered speak not only of technological problems but also of potential market setbacks and an inability to meet the public halfway and negotiate with it.

according to Ashgabat and Baku, the final impediment to building the Trans-Caspian Gas Pipeline (TGP) – something Turkmenistan has been trying to achieve for over twenty

Whenever the Baltic Pipe project is mentioned, it is accompanied by the adjective “strategic”, to convey its importance. The project is a crucial part of extensive Polish ambitions