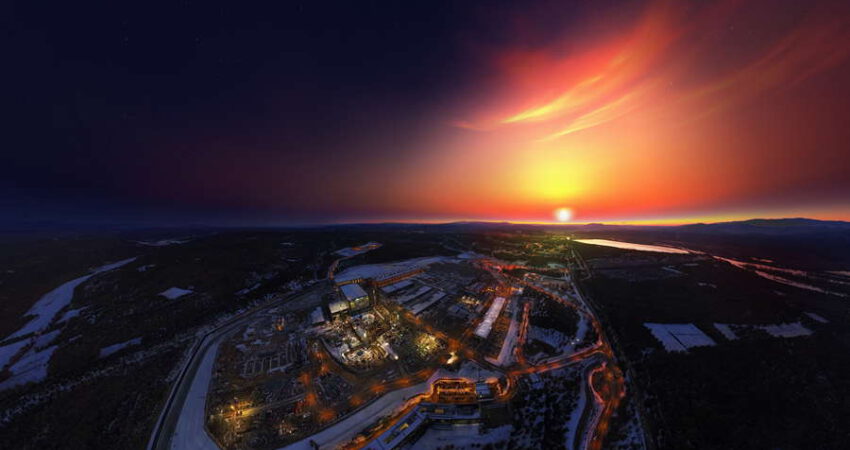 The construction of the International Thermonuclear Experimental Reactor (ITER), one of the most large-scale international energy projects, was launched in Provence over thirty years ago. Its creators were certain that in 2035 – this was the exact year for which a full-scale thermonuclear reaction was planned – its powerful reactor would bring about an energy revolution. The project is comparable to the Large Hadron Collider in its complexity – the installation includes more than ten million structural elements. The project has quite a few critics, who believe that it is late, too expensive, and does not meet modern requirements.

The original aim of the project was to demonstrate the possibilities of obtaining safe thermonuclear energy and using this for peaceful purposes. The idea that lies at its heart was originally proposed by Soviet academics Andrei Sakharov and Igor Tamm in the 1950s. ITER was started in 1988 as a joint project involving scientists from East and West. The direct initiators of the project in 1985 were Soviet leader Mikhail Gorbachev and US president Ronald Reagan.

Alexander Alekseev, chief advisor to ITER director general Bernard Bigot, has been working on the project from the very start. In a discussion with Energy Brief from the project’s headquarters in Caradache, he recalls that it was the academic Evgeny Velikhov who suggested the idea of the project to Gorbachev.

Currently, the European Union, the United States, Russia, China, Japan, Korea and India are all involved in the project.

In 2005 a site was selected for the construction of a power station in the vicinity of the French town of Caradache, at which point preparations for equipping the ITER complex began. A vast construction site the size of four hundred football pitches was created in a forested area in 2007. The construction of the tokamak building began in 2010: a central, seven-storey building 80 by 120 metres was built on an area of around 42 hectares. In all, more than two thousand engineers, technicians and labourers have been engaged in building ITER. The overall number of people engaged in the ITER project worldwide is estimated at two hundred thousand.

In his memoirs, Sakharov wrote that he had begun to think about the problem of a controlled thermonuclear reaction as early as 1949. In 1950 he was shown a letter from Oleg Lavrentiev, a young sailor in the Pacific Fleet, which had been sent to the addresses of the government and the Academy of Sciences. Lavrentiev wrote about the importance of the problem of thermonuclear reaction for the energy of the future and proposed making high-temperature deuterium plasma using a system of electrostatic isolation. Sakharov considered the question raised in the letter extremely important but did not agree with the plan Lavrentiev had proposed. As a result of joint work, Sakharov and Tamm suggested a system that later came to be known as a tokamak – a portmanteau word formed from the Russian for “toroidal chamber with magnetic coils.” This term is now used throughout the world and Russian scientists compare the word with other internationally recognized terms such as sputnik and matryoshka.

A tokamak is a chamber in the form of a ring doughnut, on which coils to create a toroidal magnetic field are wrapped. This field sets a trajectory along which ionized plasma particles move. Air is pumped out from the vacuum chamber, which is then filled with a mixture of deuterium and tritium. Next, a vortical electric field is created in the chamber, which causes a current flow and the ignition of the plasma itself. Several tokamaks have been assembled at Moscow’s Kurchatov Institute, including the T-10 tokamak which has been running since 1975, when it was the largest tokamak in the world. The Т-10 has produced the record temperature of 100 million degrees, hotter than temperatures on the sun itself.

“The basic elements of the tokamak are a vacuum chamber and a magnetic system. In the magnetic system there are coils that create a toroidal magnetic field, that is, there are coils along the line of plasma that create toroidal fields to control this plasma. Since large fields and large currents are needed here, a superconducting magnetic system is used, which works at the temperature of liquid helium, 4 degrees Kelvin – that is, at a temperature close to absolute zero. In order to reduce heat flow, everything is placed in a cryostat. The cryostat in the ITER installation is the largest in the world. It is 30 metres in diameter and 30 metres high,” explains Alekseev.

In terms of cost, the project is extremely expensive. Widely varying figures, ranging from €20 billion to €35 billion, have been mentioned publicly. But the experts Energy Brief spoke to believe it is still difficult to determine the exact cost since the countries involved in the project are primarily making in-kind contributions of equipment rather than contributing financially. This is a particular feature of the project.

The relevant national agencies regulate supplies. In February 2021 the European Union took the decision to allocate a further €5.7 billion to the construction of the reactor from 2021 to 2027. Incidentally, according to the ITER Agreement, Euratom is the Host Party. The EU is also the largest financial contributor to the project, covering almost 40% of the cost.

ITER’s main mission is to demonstrate the scientific and technological possibilities of using thermonuclear energy on an industrial scale and to fine-tune the relevant processes. The scientists maintain that using tokamaks will make it possible to produce a large quantity of energy safely, without CO2 emissions and with a minimal amount of waste products.

“In a nuclear power station there is a fission reaction, and there is the concept of ‘critical mass,’ when a chain reaction starts to occur: this is uncontrollable and ends in a nuclear explosion. So, put simply, the control system contains this reaction. But in a thermonuclear reaction, all efforts are focused on creating the conditions for a thermonuclear reaction. If anything goes wrong, it simply stops itself,” claims Alekseev.

He notes that a second point is that nuclear power stations require a large amount of fuel, and if there is an incident, tonnes of radioactive fuel can be dispersed over and contaminate large areas. Alekseev is confident that this cannot happen with a tokamak.

“In a thermonuclear installation there are just grammes of fuel: one, two or three grammes of tritium and deuterium. The difference is huge: there you have tonnes and here it’s grammes. In the unlikely event of someone blowing up a tokamak and it exploding into tiny pieces, then it would only be the hardware that would ‘glow.’ A cloud of contamination is impossible in a thermonuclear installation,” he says. Alekseev believes that there is currently no alternative to thermonuclear energy since there are unlimited volumes of fuel needed for it.

“There is a huge amount of the fuel – by the most modest estimates, enough to last for millennia. Deuterium is obtained from water and tritium can be extracted from lithium (there is almost 200 times more lithium than there is uranium at the Earth’s core – ed.). In this sense, ITER’s mission is to demonstrate a controlled thermonuclear reaction with a high output of energy,” he says.

Just one gramme of fuel from a mixture of deuterium and tritium, which will be used in the installation, will yield the same amount of energy as eight tonnes of oil. Using the deuterium contained in a bottle of water produces as much energy as burning a barrel of petrol.

“If all the technology is developed and all the issues are resolved then the design and construction of power stations will go much more quickly … I am sure there will be a second revolution: the first was in the 1960s when Soviet scientists invented the tokamak,” says Alekseev.

The project’s critics, of whom there are plenty, profoundly disagree with Alekseev. They believe that ITER is well behind schedule and all efforts should now be put into developing renewables.

“The commercial feasibility of using this technology is very much open to question and will at best be possible only at the end of the century. It’s too expensive, too late, and too much is unclear. ITER is looking more and more like a pit that billions are being thrown into, with no happy ending,” believes Sylvia Kotting-Uhl, the representative of the German Green Party responsible for questions of nuclear energy policy.

Prof. Dr. Matthias Bartelmann, professor of astrophysics at the University of Heidelberg points out that “the project is enormously expensive.” It costs more to finance than the International Space Station.

Nevertheless, the construction of the installation itself is currently in full swing at Caradache. The lower part of the cryostat has already been installed. It is expected that the launch will take place in 2025, and a full-scale thermonuclear reaction is planned for 2035.

Meanwhile, the main question currently is whether thermonuclear energy will be needed in the future. There is more optimism about this, since even the pessimists have to concede that renewables may not be sufficient for providing the Earth’s entire population with energy in the future. Some experts predict that the production of industrial models for thermonuclear reactors could begin in 2050. And thus there is hope that humanity will see an artificial sun this century.